Posted by benoc in history, humor, life, television on September 7, 2007 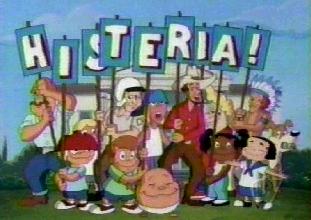 For two or three years around the turn of the 21st century, there was a show on the Kids’ WB called Histeria. Something about the wacky humor, somewhat bizarre cultural references (including to Pee Wee’s Playhouse, Justice League, Monty Python, and others) mixed with a genuine approach to teaching history to kids stuck watching TV got me hooked on it.

Some of my favorite bits that I can remember off of the top of my head include:

The good news is that, even though the show has been off the air for several years now, we can still enjoy it through the magic of the internet. AOL Time Warner put Histeria, as well as several other shows up on the AOL Video website. Check it out at http://video.aol.com/video-category/histeria/1576.

I finally got around to peeping the latest episode off of the DVR last night. Pure. Television. Goodness. Amanda referred to it as the best hour of television ever. Now, I wouldn’t go quite to those lengths, but it definitely ranks right up there in my book as the best thing to come through my cable box in quite some time. At several points I found myself sitting on the edge of the couch practically hooting at the screen. Here are some observations: