Trip and Some Pictures Not Related to Recent Trip

The trip to Champaign-Urbana was relatively uneventful. The job was a success, although there are still a couple of loose ends to tie up (migrating from listmaint to mailman, and coming up with some web-based password-changing app). On Saturday, I met up with ck for some Lil’ Porgy’s BBQ (which was excellent, BTW), and some crazy Guitar Hero II action. I capped off the trip by having a lunch outing with the ‘ol CITES gang at El Toro II (one of Champaign’s many many good mexican establishments), and then going to see Hot Fuzz with ck and chas. Good movie. I highly recommend it.

Finally, I downloaded (uploaded?) the pictures from the camera and made an album of our trip to New York City (including a visit to Shea Stadium), and some random pictures from a couple of Sox games at Fenway that Kristy and I went to over the past couple of weeks. The big goof in the mets shirt is my friend Dennis (who was kind enough to let us stay with him).

So, a whole mess of people came over to watch the Sox’ losing effort against the Yankees this past Saturday, and it was a good time. For the record, I highly recommend the “Hot and Spicy” varietal of Johnsonville Brats. After the game was over and most of the folks left for some crazy party in Sullivan Square, us remaining individuals sat around watching the tube and drinking some of Anne’s friend Craig’s very fine home-brew (thanks Craig!).

The topic of Guitar Hero came up, and how I was thinking about picking up a copy for my PS2. Now, here’s where living across the street from a Best Buy comes in handy, and is somewhat dangerous. About 5 minutes later, we had the goods and were off and running with the game.

Several hours of pure awesomeness ensued, and Amanda has some photos up of us rocking the joint. So, by now I’ve got everything beat on “medium” level (and I must say that my “Free Bird” is coming along quite nicely), but I want to get some more playing time in and really master the rig before moving up to the next skill level. Wish me luck.

An interesting footnote to this story is the Joel Zumaya story. Apparently Joel, a fire-throwing pitcher for the Tigers, missed a few games of the ’06 ALCS due to “soreness” from playing the game too much. I suppose it’s something to keep in mind, but then again I’m not a major league pitcher.

Back in Boston after a few days in the Big Apple. I’m not going to recount the whole trip, but Here’s a list:

Kristy and I will be watching the game and enjoying the Fenway ambiance and the hope of a new season. Please accept our cordial invitation to enjoy the game, called by Don and Jerry on NESN in all HD glory at our humble abode. The usual baseball food will be provided (Sausage of various varieties) as well as other goodies and beverages. Feel free to bring along anything (or anybody) you may want. The game starts at 7pm, so festivities should start earlier than that (6 -6:30?) if possible. Let me know what you think.

If anyone needs directions to my place just call or email me. You don’t want to drive in on a game night unless paying $30 to park someplace is your idea of a wise expenditure. Luckily (as those who have visited already can attest to), our apartment is easy walking distance from both Kenmore and Fenway(D line) T stops.

My former co-worker and all-around good guy Mike (a.k.a. “nut”), has a great rant/entry on his blog about what it’s been like to be a Cubs fan / Illinois sports fan lately. Good stuff. He makes some great observations as to what it was like as a Cubs fan watching the Red Sox win in ’04, the White Sox win in ’05, and the hated Cards win it all last year.

And here’s a gem from the comments:

“You know, allegiance to a sports team is actually stronger than faith in a religion. With religion, you can always convert. Just ain’t done with your team.
That said, I think being a Cubs fan is akin to being a nihilist.”

Only 15 days left until the start of the season. Apparently they were either testing the scoreboard today, or there was some sort of media event, because this is what I spied when looking out my living room window: 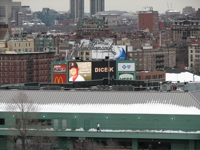 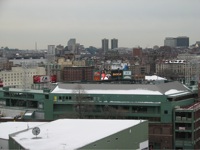 I’ll let those images speak for themselves…

With the Bears actually having the season that they did, I tried really hard to actually get into the whole football thing this season. But, try as I might, I just can’t really seem to follow football. The thing of it is, though, that I used to be a pretty big football guy. Back in high school and before, I watched more football than I did baseball. Of course, most of that was probably due to the fact that I lived in western New York during the Buffalo Bills’ ill-fated four consecutive trips to the super bowl. Now that I think of it, maybe that’s just what soured me on football altogether. I have distinct memories of the good and the bad. I remember Scott Norwood’s missed field goal to lose the Super Bowl (Wide Right!). We were listening on the radio to backup QB Frank Reich leading the bills to the greatest comeback in NFL history — overcoming a 35-3 drubbing in the third quarter — against the Houston Oilers (we had to listen to it on the radio, by the way, due to NFL blackout rules). By the way, congrats to Thurman Thomas for making it to the hall this year.

Since adopting Boston as my new home town, I’ve made an effort to like the Patriots. Really, I’ve tried. And I’m really sorry, but that dog just won’t hunt. It seems that as the years go by, I actually like the Patriots less and less. In fact, I found myself rooting for the Colts in the AFC championship game this year. It’s a tough thing to admit, I suppose, for one living in New England, but there you go, I’ve said it.

So, anyway, how many more weeks until the Sox take the field? Props to mrhe for getting the ball rolling on this. I have a healthy dose of skepticism about the whole Dice-K thing, but we’ll see what happens.

Oh, one more thing. Here are a couple of ads from the game last night that were particularly amusing. I think it’s possible that I buy emerald nuts exclusively these days, just on the strength of their advertising. But then again, they are actually some pretty tasty nuts.

Well, I’m off to Champaign-Urbana for a few days to visit niece, nephew, brother-in-law, etc. and also to visit with some former colleagues at the UIUC. Also, I can’t exactly put my finger on it, but for some reason I dislike the Cardinals. I’m mostly ambivalent towards the National League in general, but maybe it’s because the Cardinals fans in Champaign-Urbana (and there actually were a decent amount of them, being only two hours or so from St. Lous) when we lived there had the reputation of being the “hicks” compared to the more populous Cubs and White Sox fans. Just a thought.

That Monday Night Football game (Bears vs. Cardinals) was a head-scratcher. Don’t get me wrong, it was one of the most notable games I’ve ever had the pleasure of watching. It was a freaky game, just not a very good game. A 20-point-late-third-quarter comeback with no offensive scoring at all (first time that’s happened in the history of the NFL, by the way)? Winning a game where Rex Grossman threw four interceptions, and lost two fumbles? That missed field goal at the end? Wacky stuff. Team of destiny, or did the Cardinals just send this one into the weeds? Who knows. One could actually understand why Dennis Green was so tweaked in his postgame “interview” though. Here’s the clip on youtube.

Kristy and I saw The Departed over the weekend at some point. It was a fine movie. Probably one of the better flicks I’ve seen in a while. Damon, Nicholson, Wahlberg, Sheen, Baldwin, etc. made up a great cast. The authentic Boston flavor made it even better (real scenery, since it was mostly filmed here, and some Dropkick Murphys rocking out as well). I highly recommend it. I didn’t even mind the ending that some other people I know have took some issue with. I will not spoil it for anyone though.