UPDATE: Here is a composite picture that tells part of the story. Click for the full-size image. On the left is from last weekend (February 7th, 4:11pm). On the right is this morning (February 15th, 11:15am). The walls and mountains of snow just keep growing. This includes another 14″ or so that has been added in the past 24 hours (after writing the blog post below). 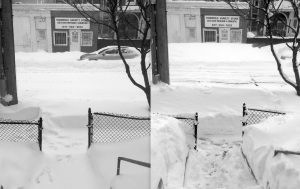 Please excuse the pun in the title (or don’t). If you haven’t heard, Boston has gotten an unprecedented amount of snow over the past three weeks and will probably end up with about 70″ within a 30-day period.

I come from Rochester, New York. Depending on your statistics, it is considered one of the snowiest cities in the U.S (and sometimes is #1 on that list). So my thought has been: have I just been living outside of the snow belt for so long that what used to not be a big deal in my normal winter experience is now completely bizarre to me?

Let’s start by looking at the current leaders of this season’s “snow bowl“. Boston is right there in between Buffalo, Syracuse and Rochester, and is behind the total amount of snow that snow-belt cities Buffalo and Syracuse had at this point last year, and about equal with Rochester. So yes, this is an unbelievably large amount of snow for Boston, but not unprecedented for some urban areas.

The statements so far from the mayor and officials from the local mass transit authority (MBTA) indicate that the real issue here has been an inability to clear out snow from streets, train tracks, and to maintain equipment which the snow and cold has damaged. Mass transit is completely shut down tomorrow again, and a snow emergency continues. This is a good move, in my opinion, because we need an extra day of cars and people not being out there so that the city can do something about removing the mountains of snow.

Re-opening the city so soon after the first storm two weeks ago was, in retrospect, what got us into the current mess. You can only shove so much snow aside before there’s just too much of it and the streets narrow to be impassable. This is precisely the situation we were in here for most of last week. Traffic was at a standstill as two-lane streets became one (or even 1/2 lane) with parked cars and mountains of snow competing for road space. Lets hope the crews make some good progress cleaning up the streets and sidewalks tomorrow while we’re all home from work. I also hope that the embattled MBTA can get its act together. However the lack of budgetary attention paid to that agency from the state over the past few years, and downright animosity from residents of the western suburban and rural part of the state when faced with their tax dollars paying for “city” infrastructure has left the agency in a spot where they just don’t have enough resources to remove all of the snow and repair/maintain equipment. By some estimates last week about half of the trains on certain subway lines were out of service due to weather-related malfunction.

So, good luck to them. And they should get a move-on because the current NOAA forecast discussion indicates a good chance of a potentially significant storm this coming Thursday, and another one Saturday into Sunday.

Now, back to my original question about 70″ in a month. I looked around for record of this happening in a city before (particuarly a major city, like Boston). I found a few of similar incidents in smaller cities though — all in the “snow belt” region of Buffalo-Rochester-Syracuse, of course. Back in 1985, Buffalo had 68 inches of snow in December. That’s less than we’re facing here now, and in a city that’s smaller and probably has a much easier time with snow removal and street clearing (not to mention no large subway/trolley system to also keep clear). In December 2001, the city of Buffalo had a record 83 inches of snowfall, with a maximum of 44 inches on the ground at one point. That seems to indicate to me that there was some sort of thawing in between — a luxury we have not had here in the city of Boston over the past three weeks. In Syracuse, however, there was also a 64 inch December, and supposedly a 97 inch January back in 1966 that I really want to find and read some more about. But other than those few anomalies? I couldn’t find a month of more than 52 inches of snow for Buffalo, Rochester, or Syracuse.

So yeah, 70″ in a less than a month is very very rare for *any* place — even the snowiest cities in this country that deal with blizzards regularly. It’s certainly unprecedented for a major city with a multi-mode mass-transit system and a population over 640,000 (4.5 million in the “greater boston” MSA). In other words, I haven’t gone soft. This really is a whole lot of snow.

This entry was posted on February 9, 2015, 10:10 pm and is filed under history, life, reality. You can follow any responses to this entry through RSS 2.0. You can leave a response, or trackback from your own site.