Picture it: voters have just elected Bill Clinton to a second term in the white house, the 100th olympic games are over and the images of Kerri Strug winning the gold medal for the US in gymnastics on a dislocated ankle, and Mohammad Ali lighting the torch are fading, and the Unabomber turned out to be some crazy dude named Ted Kaczynski.

It’s the fall of 1996, I’m a freshman in college, and although my memory is fuzzy (it being over a decade ago), this is when I discovered the Border Cafe in Harvard Square. There’s not quite anything like the warm feeling we get from comfort and long-term familiarity. See: comfortable old shoes, your favorite old t-shirt, the brand of cereal that you’ve been eating since before you could walk, your best friend from childhood, your hometown, etc. For me, you can add to that list the Border Cafe. It’s a crowded, wait-outside-in-the-cold-on-weekends type place with a loud, umm…”rustic?” atmosphere. The drinks are sort of watered down, the service quality is hit-or-miss, and I’ve had somewhat better mexican food (even in Boston, which seems to lack mexicans for some reason as compared to Champaign IL). Irregardless, I’ve developed a strange attachment to the place at some point over the past decade.

My standby until very recently (thanks to the scottographer), were the “Shredded Beef Enchiladas.” Actually, at one point they used to be called “Jose’s Shredded Beef Enchiladas,” but apparently Jose is no longer with us. These days, the chimichurri steak has caught my fancy. The portions, in general, are excellent, and the homemade chips and salsa are delightful. Also, I’d like to give two more points to Mrhe for introducing me to a concoction known as the “blue margarita.” It’s just what it sounds like — a margarita that is blue (presumably because of the addition of Blue Curacao). On that note, actually I’ll also give two points to the blue margarita itself, on the basis of it being so darn tasty. One predictable and consistent downside, however, is that, for example, I was there last night and over 24 hours later my coat still smells of mexican food and spices.

Anyway, writing a full review of the Border Cafe would be like trying to write a review of Nick Tahoes (another favorite institution of mine, and many other western New Yorkers). It’s a place I’ve been going to with old and new friends for years — no I didn’t meet my wife there, but we sure went on, and continue to go on plenty of dinner dates there. So lets raise a glass (filled with a bright blue margarita, if you wish) to the Border Cafe. 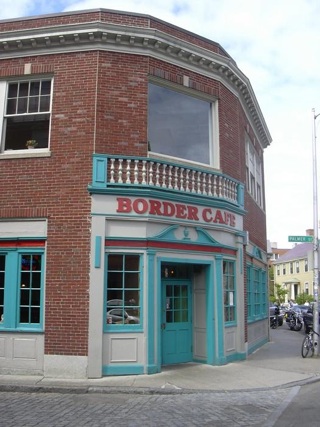 This entry was posted on January 21, 2007, 12:18 am and is filed under life. You can follow any responses to this entry through RSS 2.0. Both comments and pings are currently closed.