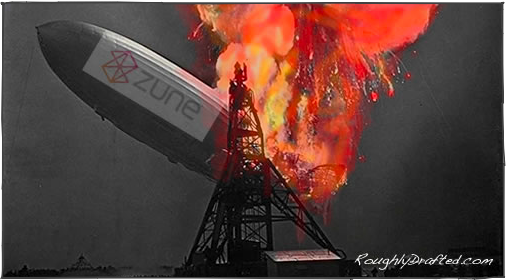 Readers of this blog can be excused for forgetting that Microsoft released a little thing called the Zune a couple of weeks ago. The somewhat large, rectangular, sometimes-brown rubbery portable video/music player was under development by Microsoft at a cost of untold millions of dollars and vital man-hours to be thrust upon the market in time for the holiday season this year to compete with the ever-ubiqitous and 80%+ market-share holding iPod.

Well, the product launch seemed to fall upon deaf ears. The new player pretty much landed with a “thud.” No excitement, nobody running out to the Best Buy or Target to grab their Zune on the day it was released. After months of hype, Zune has fallen to 93rd (at the time of this writing) on Amazon’s list of most popular electronic products behind pretty much every other portable audio player and just about anything else anyone would want to buy. The iconic image that will quite possibly forever be inextricably linked to the Zune is the installation error screenshot, featuring a bizarre picture of people doing who-knows-what on the ground with some asian woman’s face contorted into a bizarrely approriate expression of pain and anguish.

With Zune, Microsoft has apparently totally thrown their ironically named “Plays For Sure” initiative into the dustbin of history. I always thought that the idea of P.F.S. was good. The only way anyone could go up against the iPod and iPod technological ecosystem would be to band together and offer something the iPod most certainly does not — choice. The “Plays For Sure” initiative states that as long as you buy a player that is labeled as “Plays For Sure” you could buy music from any of the participating stores and expect it to sync and play flawlessly (in theory, at least). Obviously, the Zune not working with this existing infrastructure has pissed off all of the other former Microsoft allies (Creative, SanDisk, Napster, etc.) and has analysts scratching their head as to why would anyone want to get a Zune now if it means you can only use it with the proprietary Zune-only store and Zune-only player. The darn thing supposedly doesn’t even work with your pre-existing and pre-installed Windows Media Player.

Beyond that, I could go on and on about how this player is flawed. You can’t buy the songs directly with money. You need to trade in your money for “points” that, in turn, are used to purchase the music. Since there’s a minimum amount of points you can get, it’s “like a county fair that makes you buy food tickets, this system forces you to buy more than you need for the next transaction” (washington post). The Zune store doesn’t offer videos yet. The player is bigger and heavier than the iPod video and other competitors, yet the screen offers no additional pixels. The software is buggy and prone to crashes and difficult installs (see all the reviews mentioned below). Apple has already stuck it to Microsoft by lowering the iPod price to $250 with relatively short notice before the Zune launch. Originally, the Zune was supposed to price at $300 — competitive with the iPod. Apple’s move forced Microsoft to lower the Zune price to $250 to still be competitive, so now they’re taking an additional $50 loss on each player sold. I know it’s supposed to be a loss-leader initially, but that’s ridiculous. And remember, Apple and all other player manufacturers sell their players for a profit, a novel idea, eh?

Tech pundits and reviewers are having a field day writing about the Zune’s shortcomings and the potential for it to be a massive failure:

This entry was posted on November 26, 2006, 9:43 pm and is filed under reality. You can follow any responses to this entry through RSS 2.0. Both comments and pings are currently closed.